What Is Isometric Projection?

Pictorial projections are utilized for presenting ideas that might be easily understood by persons, even with-out technical knowledge and training of multi-view drawing.

The Pictorial drawing shows several faces of an object in one view, approximately as it appears on the eye.

It’s a pictorial orthographic projection of an object where a transparent cube containing the object is tilted before one of those solid diagonals of the cube becomes perpendicular to the vertical plane along with the three axes are equally inclined to this vertical plane. 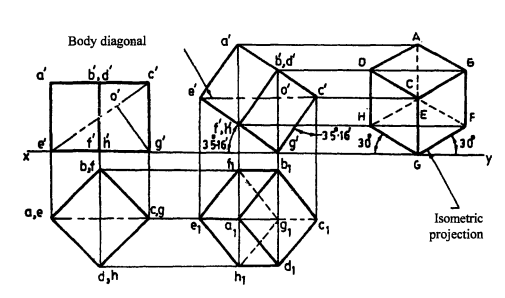 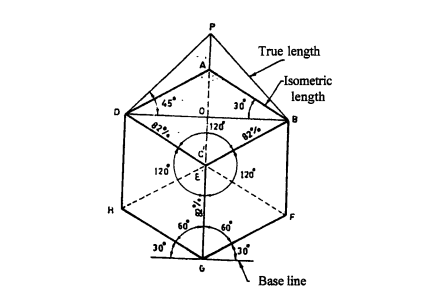 In the isometric projection of a cube shown in the show above figure-2, the top face ABCD is sloping away from the observer, and hence the edges of the top face will appear fore-shortened.

For this, reproduce the triangle DPA as shown in the show below figure-3. Mark the divisions of true length on DP. Through these divisions, draw vertical lines to get the corresponding points on DA. 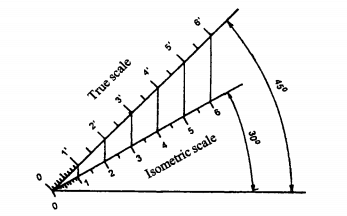 The divisions of the line DA give dimensions to isometric scale. In the triangle ADO and PDO at the show above figure-2 ( An Isometric Cub), the ratio of the isometric length to the true length,

2. Vertical lines on the object appear vertical at the isometric projection.

3. Horizontal lines on the item are drawn at an angle of 3 0° with the horizontal at the isometric projection.

Drawing of objects are seldom drawn in true isometric projections, since using an isometric scale is inconvenient.

Instead, a convenient way in which the foreshorten-ing of lengths is ignored and actual or true lengths are utilized to obtain the projections, known as isometric drawing, or isometric perspective is normally utilized.

This is advantageous because the measurement could be made directly from a drawing. The isometric drawing of the figure is slightly larger (approximately 22%) than the isometric projection.

Since the proportions are the same, the increased size doesn’t affect the pictorial value of this representation, and at the same time, it might be done quickly.

Shows in below a figure the difference between isometric drawing and isometric projection. 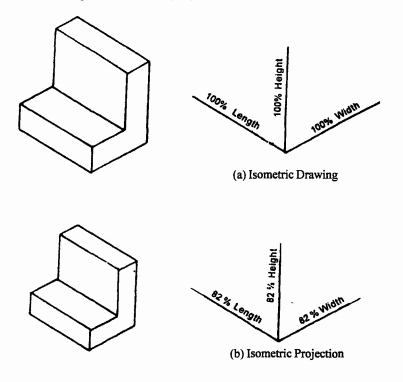 1. Study the given views and note the principal dimensions and other features of this object. 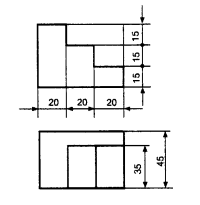 3. Mark the principal dimensions to-their true values along the isometric axes (b).

4. Complete the housing block by drawing lines parallel to the isometric axes and passing Through the above markings (c).

5. Locate the principal corners of all the features of the object on the three faces of the Housing block (d).

6. Draw lines parallel to the axes and passing through the above points and obtain the isometric Drawing of this object by darkening the visible edges (e). 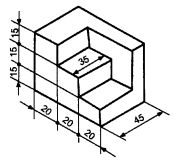